I hope these tips help you with forward momentum and cutting those brake lines! It's also always a good idea to pair up with an instructor or skilled paddler and ask them to observe your skill set to give you feedback. They may be able to see how you can perform the skills even better.
Happy paddling!
Kay-Yoga Jo
Posted by JoAndra at 11:12 AM 1 comment:

Finding Stability in a Sea of Chaos

As we indulge the sounds of life, a mosaic of diverse vibrations, notes, and beats play upon our ears at times orchestrated with purpose, other times randomly.   With the experience of life, we perceive these sounds and wire our minds to react to them in thoughtful predictable ways.   The sea is not unlike our terrestrial world.  As we watch the ocean, we see another type of concert manifested in the waves with rhythmic vibrations, harmonics and beats similar to the sounds we surf with our ears.  As kayakers, we are afforded the unique opportunity to become part of the music of the sea.  Where every other water going vessel passively opposes the sea's forces, the kayak alone is able to interpret and play upon each wave with elegance and precision, realizing remarkable stability for watercraft of such narrow proportions.  Last year I faced faced a situation of hostile conditions far out at sea for more than 10 hours (see "50 miles at sea") and learned in course of the trip, rather than futilely react to each wave, there was a opportunity to assimilate with the rhythms of the sea and feel stable in the midst of chaos using my paddle as an instrument, and my cadence as a verse.

But the waves and motions of the sea are even more complex and diverse than a symphony orchestra.  Waves originate from many sources and many directions, close by from boats to storms and winds hundreds and thousands of miles away, and even reflect from rocks and shorelines and move in opposite directions making the water very confused and difficult for kayaks.  A paddler unfamiliar with such conditions, like a person encountering a loud strange and unanticipated sound will react defensively with a thoughtless opposing reaction.  As we gain knowledge of unfamiliar sounds, we respond with a predictable and well thought out action.  Similarly, as kayakers, we will encounter difficult conditions many times and must develop ways to handle these situations.  Especially in a long trip where we may face difficult conditions for hours and days at a time, we do not have the luxury to react to each wave. 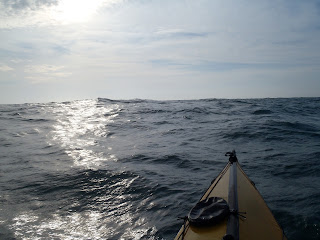 Large cruise ships use sophisticated stabilization systems with bracing fins that work exactly in the same manner as a kayaker braces with a paddle to provide remarkable stability in rough seas.  As its complex computer algorithms interpret the sea's motions and rhythms, so do our minds in an even more eloquent way with the the ability to anticipate the conditions and instinctually apply the proper stabilizing actions. 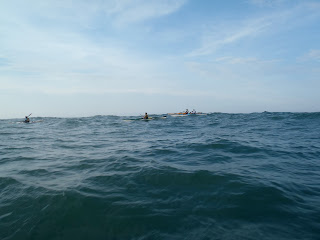 Applying a brace to the stroke is a simple matter slightly angling the blade downward during the stroke.   Angling the blade will add a downward force component in addition to a forward thrust.  Adjusting the downward angle of the paddle can be done very quickly.  Often times the paddler will need to try a number of angle settings to find just the right bracing strength.  But once the right angle is found, its normally good for the wave set and should be noted for similar reoccurring sets of waves.  If more bracing force is required to cross over a sharply pointed wave or through a whitecap break, a downward pry can be added to the stroke by pushing straight down on the braced blade during a stroke.  The pry can be used only when a brace is applied to the stroke.  Otherwise, the blade will knife downward and possibly compromise stability.  If a wave hitting the kayak requires a pry on a brace, the paddler should be ready to brace quickly on the other side to address a possible abnormally harsh transition to the downward slope with a temporary shift to a fast cadence.   As I paddled long hours in rough conditions, I was periodically hit by isolated waves which posed a problem, requiring a fast cadence until the wave passed.  On a couple of occasions  a wave broke over my bow, causing the kayak to spin off course like a compass needle.  The fast cadence possibly averted a capsize far from shore.

As waves travel through the ocean they combine and cancel each other out.  Over a distance, the resulting set of waves normalize into a consistant procession known as a "wave train".  The waves further congregate into groups like harmonics from a string instrument, which  called "sets".  The kayaker will notice groups of similar size waves passing in cycles as wave sets come and go.  The paddler will need to adjust to changing wave sets by altering the brace angle and cadence to match the oncoming set of waves and make fine adjustments.  Through a number of cycles the paddler will notice a pattern which can be anticipated and formulated into a strategy to be used at any time in the future.  As we learn to anticipate the notes of songs we hear many times, paddlers on longer trips will have the ability to predict when wave sets will arrive and structure tasks around the arrival of specific sets of waves.

As a padder moves through a rough conditions with the wave train at the beam, the kayak will transition between the upward and downward slopes of each wave.   With a normalized wave train, the waves are spaced consistency.   The paddler may use this to an advantage, by matching their stroke cadence to the consistant period of the wave train.  A slower cadence is used for longer wave periods.  A faster cadence is used for more confused conditions with sharp pointed waves.  When in doubt, I always start with a faster cadence and adjust downward to empirically match the conditions.  The transition between braces should match the crest and the trough where the slope changes.  After a while I was able to develop an instinct to match my cadence to the wave train and develop a strategy for a number of conditions and realize a feeling of stability and confidence in a sea of chaos as these motions became more instinctual.

As kayakers, the chorus of the sea summons our skills and intuition to artfully ply confused waters with uncommon grace and dexterity while bearing witness to its every nuance like no other craft.  As a musician contributes to a song, the kayaker flows with the beats and rhythms of the sea, wielding their paddle in a special art of seamanship as a small contributor in the greatest composition.

There's probably nothing more fun (to some of us adrenaline junkies) than surfing the perfect wave.

That said, and after a surf day that was chock full of lessons learned from observation, I'd like to share these pointers.  Please feel free to add your own comments and knowledge!

·        Assess the waves when you arrive first.  Are they dumping?  What is the timing between them?  What are the conditions?


Each year, needless deaths occur from hypothermia.  The ACA states that 70% of drownings could have been avoided if the victim was wearing a PFD.  This doesn't reflect the number who may not have died of cold shock or hypothermia had they been properly dressed for immersion.

So here's my general rule:  If you do not wish to swim in the water as you are dressed, then you should not be kayaking (or SUP) in the water....doesn't matter how experienced you are.

Capsizes happen... kayaking is a wet sport... if you are not dressed for the water temps, you are risking your life.  Hypothermia robs your body of heat, mental acuity and physical dexterity.

Try this test.  plunge your hand into a bucket of ice water for up to 5 minutes and see if you can still pick up a penny....sounds so simple, right?  Most heat loss occurs from head, neck, hands and torso.  Know the H.E.L.P position.... better yet... don't put yourself at risk.

You may also wish to carry a cag, bivvy bag, or shelter, matches or lighter, thermos of hot tea, and warm change of clothing.  Knowing how to help someone else who is showing symptoms of hypothermia may help save their life.

Need more information?  Almost every kayaking website like ours, has informaton devoted to cold weather.  You'll find a helpful temperature chart and compelling video on the above link.  Feel free to post references to share!