Know Your Kayak Under the Water (part 2): Stability Applications

There are many considerations between practicality, safety and desire when we shop for a kayak.  We may look for features that empower us for a realm of high adventure, or opt for a more modest craft to spend a few blissful hours in a tranquil paradise.  Whatever we choose should have features that reach a balance between our aspirations, skills and confidence on the water.  Unfortunately, there is no high tech miracle that will deliver all these things for every paddler.  But instead a game of give and take that forces us to sacrifice coveted qualities we desire for the performance we want.  Hull design is all about tradeoffs.  But kayak designers are using some innovative techniques to seemingly cheat the laws of physics.   In part 1 of this series, we examined the merits of primary and secondary stability and learned the importance of selecting the proper measurement of each to cultivate our skills and piece of mind while considering the consequences of the trade-offs for our choices.  In this article we will examine some real kayaks and identify performance characteristics from their hull features and uncover some tricks designers are using to deliver performance while minimizing sacrificial tradeoffs.

The first kayak we will analyze is a popular recreation kayak targeting novice and casual paddlers with a bit more prowess to take them a bit beyond novice conditions: The Tsunami from Wilderness Systems is the choice of a wide range of paddlers from the very novice to intermediate and delivers a surprising performance when pressed. 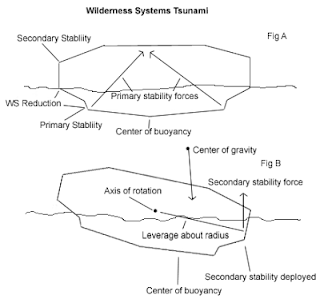 A kayak that fills this role must feel comfortable and secure to paddlers whom have never paddled a kayak, and those engaged in a secondary activity like birding or fishing.  So a high degree of primary stability is required.  In exchange for this up-front stability, a substantial wetted surface must be deployed underwater to provide an adequate angle of support for a comfortable stable feel (see Fig A).   The downside to providing this comfortable stability is the substantial drag from the broader wetted hull surface in addition to instability in rough conditions from the primary stability attempting to right itself on the slope of waves.  But it is a designer's job to cheat the laws of physics anyway they can to reclaim performance.  And the designers at Wilderness Systems had a few tricks up their sleeves.

As noted above, righting leverage is greatest at the widest point of the kayak, which in the Tsunami is located at the mid point in the hull's length.  So all of the stabilizing magic must take place at the mid point in the length where the hull is widest.  The rest of the hull's length will play little to no part in the stability at all since the leverage possible away from the widest beam is minuscule.  Therefore the totality of the hull fore and aft of the middle is better utilized for other tasks like tracking, decreasing water drag, and providing lift above steep waves.  So the protruding lip that provides secondary stability at the widest point serves a very different purpose of providing buoyancy at he bow and stern to lift them over steep waves and prevent the ends from perling.   This lip  fore and aft also keeps water from splashing on the paddler as waves hit the kayak.  Also notice how the the designers reduced the wetted area fore and aft of the middle.  The designers also added a dome area atop the ends to increase the buoyancy of the ends to reduce the tendency of periling into the waves.  The pointed tops allow the ends to cut to the surface of the wave quickly if they perl without shoveling the water.  These robust design measures at the ends is needed to overcome the lack of rocker the designers sacrificed to put more of the hull's waterline length to work in the water.  As we see later, a rocker design is for waves beyond the targeted market for this kayak, so the designers properly passed on a rocker design.   But they saw the need to bolster the ends to provide a capacity for waves, and this is one of the surprise competencies of the Tsunami. 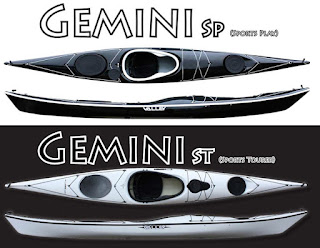 The Gemini from Valley is an entirely different kayak designed for paddlers with a more advanced skill set.  As such, the designers opted to create a hull at the other end of the tradeoff spectrum to provide more performance and less initial stability, delegating the task of stability to the paddler's skill set.   However, the laws of physics stood directly in the path of their objectives.  They wanted to design a kayak nimble enough to play in the surf and be competent for long distance expeditions.  However, these two objectives put the designers at opposite ends of some significant tradeoffs of the hull design.  A single solution was not possible as these two objectives are irreconcilable without severely diluting their desired specialized performance.  So the designers decided to start from a common base design and spin off two distinct kayaks: the Gemini SP for surf play and the Gemini ST for for sport touring.  For the benefit of our discussion, we will examine the design of both of these kayaks in broader detail to understand the choices the designers faced and the implications on the stability of both kayaks.

The Gemini SP by Valley is a surf zone play boat, designed to be nimble in the surf and turn effectively when put on edge.  It is not designed for a comfortable ride over long straight distances for hours on end.  It will smash through opposing waves and surf high atop their crest.  In a surf environment,  primary stability is not needed or desired as we know primary stability will erroneously attempt to right the kayak sideways on sloped surfaces, which is never a good thing.   However, secondary stability is much more desired since it carries a delayed reaction and deploys much deeper into the lean, so a wave will pass before secondary stability can attempt to right the kayak on a slope.  Secondary stability will also protect the paddler form a capsize while edging the kayak and leaning into a wave while side-surfing. Tracking is not as important as turning for a surf zone play boat since it must react quickly and need not hold a straight course for very long.  So the designers created a short 14' 10" (452 cm) kayak with a lot of rocker to turn when on edge and stay above the waves with an upward orientated bow and stern.  However, the tradeoff to this rocker design does not allow the load to be dispersed over the length of the hull, resulting in a hull that concentrates the load at the cockpit.  A necessary sacrifice for the the high degree of coveted rocker.   Normally, the laws of physics would be unkind to such a design as the sagging cockpit would plow the water causing significant drag.   But the designers at Valley were not ready to give up on the kayak's prowess on smoother water.  After all, the goal was to create two similar kayaks for different purposes with similar characteristics.  To make the Gemini SP snappy as well as nimble, they needed to streamline the wetted surface beneath the cockpit to reduce drag.  And the only way to do this was to add buoyancy at the keel with a steep peaked bottom to reduce wetted surface by boosting the kayak a little higher from the keel.   To further reduce the wetted surface area the designers gave it hard chines with a cut-out similar to what we saw in the Tsunami (visible in the picture below).  The picture below also shows a benefit in the substantial amount of secondary stability in reserve above the waterline.  The tradeoff for all this is a reduced primary stability which is not desired in a surf playboat, resulting in an initially unstable feeling kayak that novices would find unsettling, but a high performer for its playground in the surf.

With less wetted surface the Gemini SP shows surprising speed for this type of kayak.  I was surprised one day on the lake when a friend in his Gemini SP was able to keep up with my Epic 18x on a casual cruise on a calm lake.  Claims that Valley highly touts in their promotional material. 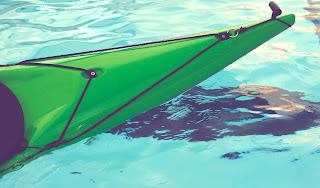 As a touring kayak, the Gemini ST sports tourer is designed for covering distances over calmer waters and provide the paddler with a more comfortable experience on the water over a longer span of time.  It is the same length of its twin the SP.   A touring kayak must be more efficient and minimize drag.   Given its very different mission, the ST has much less rocker, letting it disperse its load over the length of the kayak so it rides higher with less wetted surface drag.  The tradeoff is a less nimble kayak that does not edge as well and tends to perl into steep oncoming waves.   Unlike its twin, the ST does not need hard chines or a high peeked keel.  For its mission, the designers have given it softer chines with a flatter, low peaked bottom for more primary stability, but not too much, but allows the paddler to take a break, fish, shoot pictures, or relax without the unstable feeling of its twin the SP.   But the designers at Valley similarly did not want to give up on the nimbleness of the ST.  Without the high peeked bottom and the large cut out of the side, the designers had the luxury to bring down the sides of the hull closer to the water for a faster, more responsive secondary stability with a small cut for efficiency.  These curved sides will also lend some nimbleness to this rocker-less design when edging by putting a curve on the water (see part 3 of this series).  But the lack of rocker leaves the ST more susceptible to perl into sharp waves.  Often, manufacturers will compensate by adding more buoyancy to the bow and stern as we see in the SP.  But unlike its twin, the designers  remained true to their objective and sacrificed the surf readiness flotation volume at the ends for reduced drag and the efficiency of a more streamlined design.

So despite the very diverse performance objectives of the Valley Gemini designers, they created two kayaks rather than one to tackle an impossible spectrum of kayak performance goals in a truly unique way.  The complexity of these solutions underscores the value of hull design knowledge so we are able to understand and make intelligent choices from the abundance of sophisticated technology available.  Practically, we can only test a few kayaks on the water in far from ideal conditions.  We have seen how designers make significant tradeoffs to obtain their performance objectives.  But the motive that drives many kayak designers is to create a kayak that will fetch broad appeal so the company can monetize a successful product.  For other designers, its a labor of love they hope to monetize.  But the desires of a paddler lends purpose to a kayak as a tool leveraged to seek a path to their bliss and dreams.  Ideally, the paddler will seek the the empowering technology they need, grow into its characteristics, and find confidence to carry on to the next level.  A tall task for products of broad appeal.  But as paddlers we have choices and the ability to obtain knowledge of the science that goes into these more specialized and capable craft.  As for any endeavor no matter the discipline, the right tool is needed for the task.

In part 3 we will examine elements of hull design related to tracking and edging then dive into the hydrodynamics of skegs and directional hull features.